One year ago today, New York Knicks owner James Dolan served the team’s long-suffering fan base the latest version of his favorite dish, hope, with a side of nostalgia, when he hired Phil Jackson as team President.

Sure, Jackson did not have any front office experience, but as Dolan was quick to point out, he won two rings as a player with the Knicks and 11 more as a coach. Knicks fans were optimistic that Jackson’s gravitas could hold the meddlesome owner away from basketball decisions, while simultaneously attracting big-name free agents to the Garden.

One year into the job, that hope has faded.

Surprisingly, it is not the Knicks’ league-worst 14-53 record that has Knicks fans worried. Contrary to popular belief, New Yorkers are willing to endure a rebuilding process, and are excited about the prospect of a top-three draft pick for the first time since the team selected Patrick Ewing first overall in 1985.

The concern is Jackson, who has yet to demonstrate that he is capable of running a front office, evaluating talent or making shrewd personnel moves. In fact, all signs point to the contrary.

The Zen Master inherited a capped-out roster with Carmelo Anthony expected to opt out of his contract and just three additional assets to work with, Tyson Chandler, Iman Shumpert and Tim Hardaway Jr.

Jackson initially appeared willing to play hardball with Anthony, publicly challenging the star forward to accept less than a maximum-salary contract in order to help the Knicks build a contender. But the President of the Knicks soon caved.

New York signed Anthony to a five-year, $124 million deal, just $5 million below the maximum, and still $28 million more than any other team could offer.

Anthony is a sensational scorer, though merely average at just about every other facet of the game. He is a major piece of a puzzle, not the pillar of a franchise. You only sign a player of his caliber with 11 NBA seasons under his belt to an essentially maximum-salary contract if you believe your team is close to contending.

That points to Jackson’s first major miscalculation. His initial impression of the Knicks, which he expressed during his introductory press conference and again in the preseason, was that the team could compete for the playoffs this season. Following a competitive 2014-15 campaign, Jackson would use the cap space at his disposal in the summer of 2015 to turn the roster into a contender.

The hall-of-fame coach should have known that it was unrealistic to expect a collection of players who were not in the team’s long term plans to buy into an offensive system (The Triangle) which was a poor fit for their individual styles of play and takes years to master.

The result has been the worst season in franchise history. To make matters worse, Anthony underwent season-ending knee surgery in February.

Jackson is now caught between maximizing the elite years of a star on a “win-now” contract and a team that desperately needs to rebuild. One also has to wonder if Anthony, a shot-happy forward on the wrong side of 30, will help or hinder Jackson’s recruiting efforts over the next two summers.

As for those three assets Jackson inherited, Chandler and Shumpert were traded and Hardaway’s value has all but disappeared. All Jackson has to show for them is Cleanthony Early, Thanasis Antetokounmpo and a future second-round draft pick.

Jackson packaged Chandler in a trade with the Dallas Mavericks designed to dump Raymond Felton. The Knicks received two second-round picks (which they used on Early and Antetokounmpo), Jose Calderon, Samuel Dalembert, Shane Larkin and Wayne Ellington. Compare that to the two first-round picks the Denver Nuggets received for center Timofey Mozgov, who is inferior to Chandler on both ends of the floor, in January.

Chandler is averaging 10.4 points and 11.5 rebounds for a playoff team. New York declined the third-year option on Larkin, traded Ellington immediately, and released Dalembert in January. Early is shooting 34 percent from the field in an injury-plagued rookie year, and Antetokounmpo has yet to earn a call-up from the D-League.

Calderon has been so disappointing that Jackson reportedly tried to deal him before the trade deadline, via Ian Begley of ESPNNewYork.com. The Spaniard is scheduled to make $15 million over the next two seasons. New York would be better off with Felton, whose contract expires in 2016.

In January, Jackson used Shumpert to entice the Cleveland Cavaliers to take J.R. Smith off his hands, receiving a future second-round pick in return. Both Shumpert and Smith are key contributors on a Cavs team that has had the best record in the league over the past two months.

Hardaway looked like a future starting 2-guard after an impressive rookie season and was an attractive commodity last summer. His shooting percentage has plummeted to 39 percent this season, as seen in the chart below, via NBA.com. Considering that he does not pass, rebound or defend, he carries little value for the Knicks or any other team. 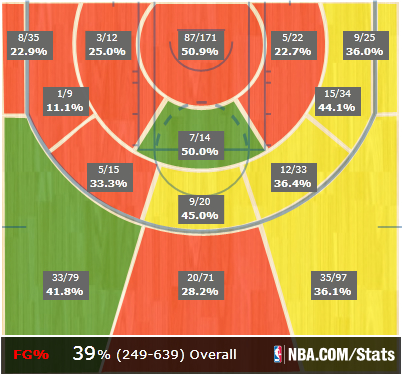 New York’s personnel decisions are indicative of a franchise that lacks experience and structure in the front office. Jackson is a novice executive, and general manager Steve Mills had not worked in basketball operations before last year. Neither has the type of connections around the league that facilitate deals.

Bleacher Report’s Howard Beck reported in January that one Western Conference executive said, “No one has Steve Mills’ phone number.” Another executive indicated that unlike most teams, the Knicks have no one who regularly calls around to gauge the value of players, or to get a sense of who is available.

Jackson has accepted blame for the team’s horrid season. The Zen Master issued a mea culpa following the Shumpert/Smith trade. “I take responsibility for it,” he said, via Al Iannazzone of Newsday.com.

Jackson continued, “Now I have to do the job that I was brought here to do.”

There is still an opportunity for him to build a contender in New York. He has Carmelo Anthony, a top draft pick this year and a ton of cap space over the next two summers to work with.

But, tearing down a roster was supposed to be the easy part. Jackson has not provided any reason to believe that he can build one.