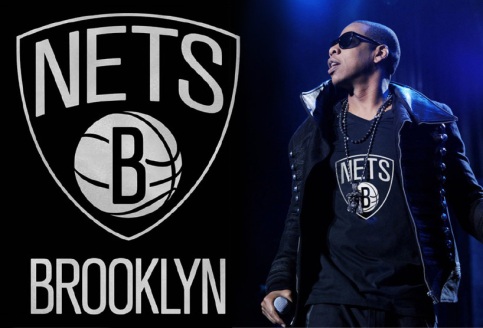 Monday morning the Nets officially became the Brooklyn Nets, ending their 35-year tenure in New Jersey. The team celebrated the occasion by unveiling its new logos (there are two) at an event attended by center Brook Lopez, near their new arena, the Barclays Center,  in downtown Brooklyn. The logos and new colors ( black and white) were designed by hip-hop mogul and part-owner of the Nets, Jay-Z.

The Brooklyn native, whose given name is Shawn Carter, is part of the ownership group that purchased the Nets in 2004. A very small part of the group. Since the Nets are not a publicly traded company they’re not required to disclose Jay-Z’s ownership percentage, though reports indicate that his share stands at about 1.47%.

The group was headed by real estate developer Bruce Ratner, who from the moment he purchased the team, intended to move the Nets to a new arena in Brooklyn, which would serve as the centerpiece of a massive business and residential complex known as Atlantic Yards. In May of 2010, Ratner sold 80% of the team to Russian billionaire Mikhail Prokhorov, who provided a $700 million loan for the construction of the arena.

Despite Jay-Z’s minor interest in the team, he’s become the face of the franchise over the past several years. Ratner and Prokhorov have wisely used his status as a pop cultural icon to market their struggling franchise. Over the past two decades influential rappers, Notorious B.I.G. and Jay-Z chief among them, have raised New York’s biggest borough to a level of exposure it hasn’t experienced since the Dodgers left town. So who better to usher in a new sports franchise than Brooklyn’s own hip-hop royalty.

The Jigga Man’s face has been plastered on Nets billboards in Manhattan and Brooklyn. He can be seen during Nets telecasts interacting with the players from his courtside seat during and has accompanied Prokhorov and the team’s general manager on recruiting trips for superstar free agents, including his good friend LeBron James.

As the franchise’s move to Brooklyn has come to fruition, ownership has begun to utilize their famous minority owner in different ways. Previously, just a brand, used to generate interest in the team, Jay-Z is now playing a more active role in marketing the Nets and their new arena. He’s not just christening the Barclays Center with a series of concerts, beginning on September 28th, he designed the actual layout of the arena.

Jay-Z is the brainchild behind what will be known as “The Vault at Barclays Center,” 11 high-end luxury suites on the event level of the arena where New York’s social elite can take in a game. In addition to designing the layout and decor of “the Vault,” Jay-Z has provided input on everything from the champagne that will be sold (reportedly $300 bottles of Armand de Brignac), to the silverware.

The suites will cost an astronomical $550,000 a year, with a minimum three-year purchase. Tenants of each suite will receive eight tickets in the first 10 rows to all Barclays Center events, including Nets games, other sporting events, concerts and family shows.

The hip-hop mogul was also entrusted to design a new color scheme and fresh look for the team’s logo. Monday, team officially introduced two new logos, one, a shield with “NETS” inscribed above

a basketball emblazoned with a “B” and a second logo with the words “Brooklyn New York” encircling a basketball containing an imprinted “B”. Thus far, the reaction to the NBA’s first black and white color scheme (The Spurs are close with their black, white and gray uniforms) has received mixed reviews, with some fans and critics touting the logos as hip/chic, while others have panned them as bland.

It was a savvy move by Nets ownership to turn the marketing reigns over to Jay-Z, as they attempt to lure fans and corporate dollars from the more established Knicks fanbase. Jay has driven his personal brand to international icon status and has repeatedly demonstrated that he has his finger on the pulse of pop culture by successfully marketing business ventures from his Rocawear clothing line to his 40/40 club.

However, in order for a product to sell, the brand must be backed by substance. Behind all of Jay-Z’s on-stage swagger is a genius on the microphone. His smooth flow, unique cadence between words and lines, tight lyrics and eclectic beats are what initially made him so marketable.

The Nets lack substance. They just concluded a 22-44 season and have been unable to lock up a marquee star to build a team. They struck out on LeBron, then went all in on Deron Williams, but may lose him to free agency this summer if they’re unable to pull off a trade for Dwight Howard.

Atlantic Yards is easily accessible to wealthy Manhattanites and Jay-Z’s swag may be able to sway the allegiance of some young fans. But the Nets need to put a competitive product on the court. As long as they keep trotting out Brook Lopez at team events, all the bling in Jay-Z’s vault isn’t going to fill up the Barclays Center.