Through the Clydescope is proud to present a very talented young writer, Lucas Lovekin, from Mr. Portnoy’s fifth grade class at PS 217 in Brooklyn, New York. Read below to find out his predictions for the NBA playoffs, which begin this afternoon.

Ahh! It’s playoff time! The best time of the year. This year, the championship  winner is not easy to pick out of the 16 playoff teams. Can the stars in Miami win a ring (in year 2 of their push)? Do the Thunder have it in them to get that far? Can the injury-prone Bulls make it to the Finals (with possibly C.J. Watson as their starting point guard?) Will the Clippers and “Lob City” be denied by the better defensive teams? Find out who will win, and who will go home.

The Miami Heat, after hyping themselves up on ESPN’s “the Decision” and then losing in the NBA Finals to the Dallas Mavericks last year, are still the favorites to win the Eastern Conference even though they are not the top seed in the East. Last year though, they weren’t either and still beat the Chicago Bulls in the Eastern Conference Finals 4-1. They seem to be able to “turn up the ‘heat’” during the playoffs.

This year, the Bulls have shown their true greatness by beating the Heat with their star Derrick Rose only scoring 2 points on 1-13 shooting. They also have added a scorer in Richard Hamilton and Luol Deng is having a superb defensive season (and scoring about 15 points a night), having received an All-Star nod. This year’s Eastern Conference Finals will be one to remember. That is, if this year’s favorites can get past the dark horses.

Now this is what makes the playoffs exciting. The upsets. The teams that you never thought would make it that far.

Let’s start with the Indiana Pacers. Their record at the end of the regular season was 42-24 (the third best in the Eastern Conference). So wait, how is a 3rd seed a dark horse? Well, not many people realize that they have done so well this season. Their upside: they have 8 solid players that can play great team basketball – Danny Granger, David West, Roy Hibbert, Paul George, Darren Collison, Leandro Barbosa, Tyler Hansborough, and George Hill. Their downside: exactly that. They have no star player. This is what stops them from competing with the Heat and Bulls. Too bad the trade deadline passed. The Pacers could’ve become the #1 seed by adding someone like Joe Johnson or Zach Randolph.

The #4 seeded Boston Celtics are playing great basketball. They may not be the most athletic or youngest NBA team, (Allen-36, Pierce-34, Garnett-35) but they have a star point guard in Rajon Rondo and have beaten the favorite Heat three times this year. 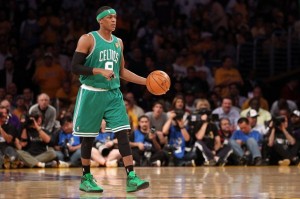 Now we have our final team looking to upset an East favorite. (Yes, there are 3 dark horses in the East alone.) The Atlanta Hawks have the ability to beat some of the top teams. Early in the year, they beat the Heat because of great bench production by the veteran T-Mac. Joe Johnson can hit some clutch shots and Josh Smith should have been an All-Star this year. They may not be 100% because Al Horford has been out for almost the whole season with a torn pectoral muscle and will miss the first round of the playoffs. One thing slowing them down is playing the dark horse Celtics in the first round.

All everyone has been talking about this year is the Oklahoma City Thunder. The #2 Thunder though, don’t have the best chance of winning the West. Kevin Durant, Russell Westbrook, and James Harden combine for an outstanding big 3, and Ibaka, well, what can’t this man swat? Kendrick Perkins’s defensive presence is great. Sadly though, there is a flaw. James Harden has a concussion. Who knows how long he will be out for? A balanced offense and defense in the starting 5 is key (technically, Harden isn’t a starter but he gets a lot more minutes than Thabo Sefolosha). The Thunder must find a way to stay strong without Harden.

The #3 seed Lakers also have a balance of offense and defense in the starting 5. Andrew Bynum and Pau Gasol can block shots and grab

boards. And of course Kobe Bryant. You want offense? He’s the best in the business, hitting game winners year after year. But, Ron Artest’s (World Peace, ha!) elbow to James Harden’s head (out for 7 games) might put a dent in the Lakers’ playoff hopes. But, didn’t the Lakers rally back from 17 down in the 4th quarter for a double-OT win against the Thunder last Sunday? I can’t see Kobe giving up too easily.

So right now you’re probably thinking that the Thunder just had a bad day, giving up a 17-point 4th quarter lead to the other L.A team. The Thunder is 3-1 against the Clippers this season. This side of the Staples Center has been getting a lot of attention all this year. With Chris Paul (and back-up Mo Williams) throwing alley-oops to Blake Griffin and Deandre Jordan and Randy Foye raining threes, Clipper fans might be asking, who’s Chauncey Billups?

Now you might be wondering, what about San Antonio, the #1 seed in the Western Conference? Remember last year, when San Antonio had the #1 seed in the West and couldn’t defeat the 8th seeded Memphis Grizzlies in the first round (more on Memphis later)? This year they’ve added Stephen Jackson and Boris Diaw to help the bench (which had been spectacular this year before the additions of Stephen Jackson and Boris Diaw). Even though they can beat teams with their big 3, they don’t have the talent and athletic ability of younger teams like the Clippers and Thunder. So where does this drop them, the second round? That’s my prediction. Who knows, it might be Battle L.A in the Conference Finals, and who doesn’t love a Hollywood ending?

Only one team comes to mind. The Memphis Grizzlies. Last year, they beat the #1 seed San Antonio Spurs in the first round, only the fourth time in NBA history that the 8th seed beat the 1st seed in the NBA playoffs. They also took the Oklahoma City Thunder to seven games in the conference semifinals. What’s different this year? Rudy Gay, (Memphis’s star), did not play for the entire playoffs last year. So Memphis, without their star, took down the #1 seed in 6 games and battled Oklahoma City (this year’s favorite to win the West, not mine though) to seven games before finally falling. If they can beat the Clippers in the first round, which they have a good shot of doing, I’m asking myself, “What can’t they accomplish this year?”

Here’s how I see it going down: