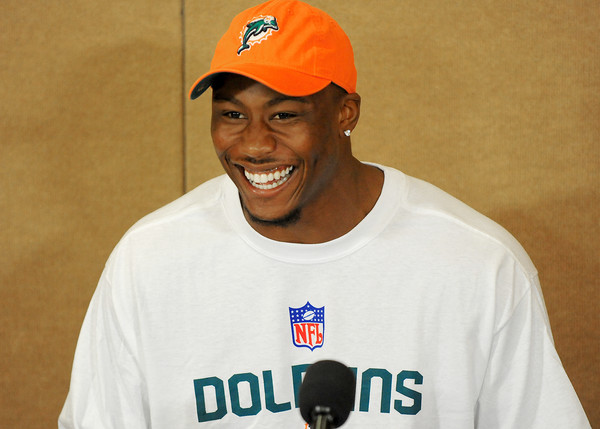 A week ago, Brandon Marshall was considered just your average egomaniacal wide receiver; self-centered, attention seeking, demanding, aversive to authority and inclined to engage in risky and/or violent activities off the field.
On Monday, the Miami Dolphins wide receiver took the courageous step of publicly revealing that he suffers from a serious psychiatric illness called borderline personality disorder (BPD). The diagnosis helps explain his history of domestic violence and disruptive behavior in the locker room.

But what does that say about all the other wide receivers in the league who share many of Marshall’s personality traits? Are several of the NFL’s elite wide receivers mentally ill?

The common characteristics of BPD are: a pervasive pattern of affective instability, severe difficulties in interpersonal relationships, problems with behavioral or impulse control (including suicidal behaviors) and disrupted cognitive processes. This instability often disrupts family and work life, long-term planning and the individual’s sense of self-identity.

There’s a long list of wide receivers who have severe difficulty with interpersonal relationships and problems with impulse control. I could rattle off countless examples of domestic abuse, confrontation with coaches and impulsive acitivities like running over a police officer or attempting suicide.

Perhaps more revealing is BPD’s not-so-distant cousin, narcissistic personality disorder (NPD). A diagnosis of NPD is based on the existence of at least five of these qualities:

People suffering with NPD often have unreasonable expectations of special treatment and tend to react to criticism with rage, shame or humiliation.

Of course, it’s possible to be narcissistic without having NPD. Narcissism is rampant in our society and appears to be more prevalent among athletes in general. We’ve grown accustomed to athletes speaking of themselves or “their talents” in the third person, referring to themselves as a brand or coming up with their own nicknames. Yet, wide receivers appear to take the concept of the narcissistic athlete to another level.

Their narcissistic tendencies have been enhanced by increased media exposure and reinforced by an escalation of in number and value of endorsement opportunities, however, the concept of the narcissistic wide receiver is not a new phenomena.

In 1973, Dr. Arnold Mandell, a team psychiatrist for the San Diego Chargers, created personality profiles for every football position. His analysis of the wide receiver was spot on and still rings true thirty eight years later.

“The wide receiver is a very special human being,” Mandell wrote. “He shares many features with actors and movie stars. He is narcissistic and vain and basically a loner.”

He added, “They love to be the center of attention. They need to be noticed. They have an imperviousness in that they don’t seem to mind criticism about being like that. All players want the respect of fellow players. Showing off usually is not an admired characteristic by most players, but by wide receivers it is very admired.”

“They are interested in looking pretty, being pretty. They are elegant, interpersonally isolated. Wide receivers don’t group, they don’t mob out. They are actors, uninflected about showing off, individualists, quite interested in their own welfare, their own appearance.”

Sound like somebody you know? How about Brandon Marshall, Terrell Owens, Randy Moss, Keyshawn Johnson, Braylon Edwards, Chad Ochocinco and Michael Irvin, to name a few.

Some may argue that there are players with big egos at every position in the NFL, it’s just more noticable with wide receivers because they play a high profile position. The hole in that argument is that quarterback and running back are also high profile positions, in fact, quarterbacks draw more attention than wide receivers, yet they don’t come across nearly as narcissistic.

Of course, that’s not to say that all wide receivers are narcissists. Jerry Rice and Marvin Harrison never drew attention to themselves on or off the field (prior to Dancing With the Stars) and the two top current wide receivers, Andre Johnson and Larry Fitzgerald, project an air of humility. Still, the percentage of narcissistic wide receivers seems disproportionately high.

So why are wide receivers so narcissistic?

There’s a chicken or the egg aspect to this question. Does the wide receiver position create narcissism or are narcissistic athletes drawn to wide reciever because of the nature of the position? It may be a little of both.

The wide receiver’s profile in relation to the quarterback may be part of the problem. Wide receivers are generally the best athletes on the field, yet they don’t receive as much attention or credit as the quarterback. Their production and profile is actually to a large extent dependent on the quarterback. Both of those facors can lead to resentment, which may manifest as narcissism. Consider Terrell Owens, who has thrown one quarterback after another under the bus, seemingly because he wanted to be the star of the team.

A possible explanation for the high rate of narcissism among wide receivers as compared to the other high profile positions is that narcissists are weeded out due to the demands of those positions. The quarterback is the team leader and if he puts his concerns and ego ahead of the team he won’t be in the league very long. Running backs are humbled by the constant pounding they take throughout the game. Narcissists are unlikely to seek that position or last at it if they do.

The wide receiver’s positioning on the field may be a factor as well. They line up alone on an island, which can foster a sense of distance from teammates or a feeling that one’s special. On the flip side, it’s very possible that loners or narcissistic personalities prefer wide receiver because of the isolation or high profile of the position, without the pressures or pouding that come with touching the ball more frequently.

Regardless of the cause, it’s diffficult to argue with the premise that narcissism is a common trait among NFL wide recievers. I’m not qualified to speculate as to whether the personality traits of specific receivers rise to the level of a disorder, or which disorder they may have. It’s an interesting subject for a psychological study.

Brandon Marshall deserves credit for recognizing his illness and seeking help. Maybe some other receivers will follow his lead. Then again, that wouldn’t be very narcissistic of them.

9 thoughts on “Is Brandon Marshall the Only Wide Receiver With a Personality Disorder?”