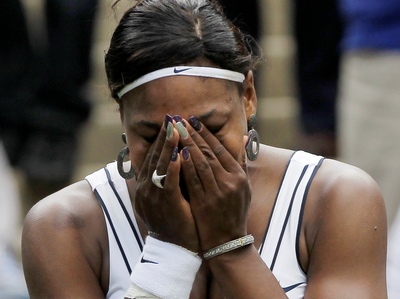 We’ve seen many different sides to tennis great Serena Williams: exulted champion, sore loser, controversial superstar, celebrity fashionista, sarcastic diva, feisty competitor and devoted sister, to name a few. But we’d never seen the vulnerable woman beneath it all, until her first round victory over Aravane Rezai of France on Centre Court at Wimbledon yesterday, when Williams buried her face in a towel and began sobbing.

It was certainly unusual for a four-time Wimbledon champion to be that emotional after a first round victory against a player ranked 61 in the world, but Williams has had a very unusual year. It began last July, when she cut her right foot on a piece of glass in Munich, requiring two surgeries to repair a torn tendon.

Just as she was about to return to action in March, a doctor discovered clots in both her lungs, resulting in emergency surgery. Williams hasn’t gone into detail about the condition, though she has since let on that she was on her “death bed.” In an interview after the match yesterday, she revealed that she didn’t think she’d be able to compete at Wimbledon. Left unsaid was her obvious fear that she’d never play tennis again.

Serena’s display of emotion was the latest turn in a career distinguished by controversy, scrutiny and of course, brilliance. To a large extent, the scrutiny that has followed her is a result of her and her sister Venus’s dominance over women’s tennis for a decade. Their background as African-Americans from Compton in a predominantly white sport created curiosity, marketability and some subtle racism. American fans are forever looking for the next Chrissie Evert. The ebony, straightforward Williams is hardly white America’s demure girl next door.

The media was tough on the Williams girls from the start. They were guilty by association for the outlandish comments of their bombastic father Richard Williams. Members of the media routinely alleged that Serena, Venus and Richard decided before the match who would win when the sisters faced each other. In one instance, the press questioned Serena’s sincerity when she withdrew from a tournament due to an injury rather than face Venus in the finals.

Some of the criticism about Serena has been more sinister. Sportswriters and bloggers have made vicious comments about her muscular body type and her weight. They’ve portrayed her as a pariah in the locker room and irreverent towards the history of the sport.

Serena hasn’t helped herself either. A few public outbursts have created the perception that she’s pretentious and a sore loser. During and after a loss to Jennifer Capriati in the quarterfinals of the 2004 U.S. Open she lashed out at the chair umpire and line judges. In 2009, Williams erupted on a line judge after being called for a foot fault, which led to match point against her. The lines woman alleged that Serena threatened her, which Williams denied. Her tirade led to another point against her, which was the match, and she was fined $82,500.

Williams also antagonized the media with her demeanor during post-match interviews. She was jubilant on the court and has displayed a sense of humor, but that rarely carried over to interviews, where she was typically standoffish at best. Her answers to questions were often sarcastic and condescending and she gave the impression that she’d rather be doing anything else.

The harshest criticism leveled at Serena had less to do with her disposition than her dedication to tennis. Critics pointed to her foray into fashion, stake in the Miami Dolphins and a book about her life which she co-authored as evidence that tennis wasn’t the central focus of her life. Evert is one of several former players who suggested that Williams was squandering her talent. Serena didn’t do much to quell those concerns, rather she defended her right to do other things.

At first glance, questions about Williams dedication to the game seem laughable. She’s been ranked number one in the world, won two Olympic gold medals, all four Grand Slam tournaments at least once and 13 total, as well as 12 Grand Slam doubles titles with Venus. It doesn’t matter how talented you are, it takes hard work and determination to achieve those milestones.

Still there have been periods in Serena’s career when she appeared distracted or overweight and didn’t reign over the sport the way she was capable of. With her unparalleled combination of athleticism, strength and skill, there’s no reason she couldn’t have challenged Steffi Graf’s record of 22 Grand Slam titles and staked her claim as the greatest women’s tennis player ever.

After her victory yesterday, Serena continued to tear up as she conducted a post-match interview with the BBC. “I usually don’t cry … but it’s just been so hard,” the defending Wimbledon champion said. “I never dreamt I would be here right now. And then to win. I just wanted to win at least one match here.”

A brush with mortality can bring one’s priorities into focus or even change them completely. Yesterday, a teary-eyed, Serena revealed a vulnerable side we’d never seen before and her true  feelings towards the sport she’s dominated. “It’s been a disaster year, but you know I’ve been praying and I have my family. . . and I love tennis.”

2 thoughts on “Another Side of Serena”