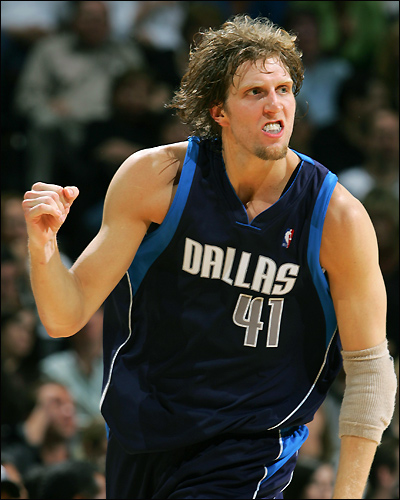 Five years ago, the Dallas Mavericks and Miami Heat met in the NBA Finals. The Mavs won the first two games at home and were poised to put a strangle hold on the Heat in game 3, leading by 13 points with just six minutes remaining in the fourth quarter. Then the bottom fell out for Dallas.

Dwyane Wade led a furious comeback, scoring 12 points in the final six minutes and the Heat won 98-96. Dirk Nowitzki had an opportunity to tie the game at the free throw line with 3.4 seconds left and the Mavs down two, but he missed one of his shots.

Miami’s comeback completely changed the momentum of the series. The Mavs were a young team and crumbled after blowing the game. The Heat won the next three games and the championship. Wade was propelled to super stardom, while Nowiztki was labeled soft and mentally weak.

The agony of that collapse seemed to linger with the Mavs as they were knocked out of the playoffs in the first round in three of the next four seasons, despite tremendous success in the regular season, including a league best 67 wins in 2006-2007.

Dirk hungered for another shot at a title. He worked tirelessly to perfect his jump shot, shooting from different angles, different spots on the floor, on the move and even off-balance. More importantly, he turned his weaknesses into strengths. The German shed the soft label by taking his game to the high post and aggressively driving the ball strong to the basket, instead of settling behind the three-point line. Through sheer determination and the wisdom that comes with experience, he learned how to close out tight games.

Meanwhile, Dallas management assembled a veteran cast around him, players with extensive playoff experience who knew how to finish games. Point guard Jason Kidd is a future hall-of-famer who played in two NBA Finals with the Nets; Shawn Marion went deep into the playoffs on several occasions with the Suns and Tyson Chandler made a playoff run a few years ago with the New Orleans Hornets. All three brought necessary grit to a team lacking toughness.

Across the country, in Miami, Pat Riley pulled off a free agency coup in the summer of 2010 by signing LeBron James and Chris Bosh to join Wade in South Beach. The three stars developed chemistry as the season progressed and were in sync come playoff time. They didn’t lose a game on their home court as they plowed through the Pacers, Celtics and Bulls on their way to the NBA Finals.

The Mavs handled the Trailblazers in round one, then swept the two-time defending champion Lakers and finished off the Thunder to set up a rematch with the Heat.

The two teams are very different than they were five years ago. In fact, each team has just two players remaining from that series, Nowitzki and Jason Terry for the Mavs and Wade and Udonis Haslem for the Heat. There’s no rivalry between the teams, though for Dirk it must feel like destiny that his long-awaited opportunity for redemption comes against the very team that revealed his flaws and stained his reputation as a ballplayer.

Miami suffocated the Mavs in Game 1 with their relentless defense, holding the Western Conference champions to 37% from the field in a 92-84 victory. Dallas was outrebounded, couldn’t match the Heat’s athleticism on the perimeter and three of their most dependable players throughout the playoffs, J.J. Barea, Chandler and Terry, were non-factors. Worse yet, the Heat didn’t even play particularly well; they shot just 39% from the field and neither Wade nor James went off.

Fans and the media overreacted after one game, as they tend to do, and many predicted it would be a short series, that the Heat’s “big three” would steamroll the Mavs. So Game 2 had the feel of a must win for Dallas. Since the league went to the 2-3-2 format in 1985 only one team has come back to win the series after losing the first two games in the NBA Finals, the 2006 Heat. The Mavs also needed to deliver a blow in Miami, where the Heat hadn’t lost a game all post-season and quell concerns about a torn tendon on the middle finger of Nowitzki’s non-shooting hand.

The game tight was tight throughout the first half and was tied at 51 at halftime. Early in the fourth quarter, the Heat pulled away. They converted Mavs turnovers into highlight reel fast breaks, in what became a dunk contest between Wade and James. Wade, who was feeling it all night, capped  a 13-0 run with a three ball from the corner to give the Heat a 15 point lead with 7:33 left. He lingered for a moment in front of the Mavs bench after dropping what appeared to be the final dagger of the game and possibly the Mavs season.

But these aren’t the 2006 Mavs. They’ve been here before. Dallas trailed Oklahoma City by 15 in the fourth quarter of Game 4 of the Western Conference Finals and came storming back to win in overtime on the wings of a Bird-esque shooting performance by Nowitzki.

Despite being down by 15 last night, the Mavs continued to fight. They dug in defensively and Miami did them a favor  by reverting to the stagnant one-on-one play they struggled with early in the season. Dallas coach Rick Carlisle went with a small lineup for a couple of minutes, which seemed to jump-start the offense. Terry scored 8 points in the fourth quarter, including a sweet pull-up jumper from the wing. Marion hit a runner from the right side and Kidd knocked down an open three on a kickout from Dirk, though in the end it was Dirk who brought the game home.

Carlisle called for staggered screens on the left side of the floor to free up Dirk at the top of the key, where he could catch and shoot or drive to the hole, while being able to see where the double team was coming from. The German scored the Mavs last nine points. He tied the game with under a minute remaining, then nailed a three-pointer to put the Mavs up three with 27 seconds remaining.

Following a timeout, Mario Chalmers tied the game with a three of his own on a blown defensive assignment by the Mavs. On the ensuing possession, Dirk received the ball at the top of the key with Chris Bosh guarding him. He faked right, spun back left, hesitated, then took two long strides and laid it in with his injured left hand with 3.5 seconds left. Wade’s last second heave fell short and the Mavs won 95-93.

Dallas finished the game on a 22-5 run. It was one of the greatest comebacks in NBA Finals history and eerily reminiscent of Wade and the Heat’s spectacular triumph in Game 3 of the 2006 series. Only this time Dirk was the hero. The Heat revival was the turning point of the ’06 series. It crushed the Mavs. Last night, a tougher, more experienced Dirk returned the favor. How will Miami respond?

One thought on “Dirk and the Mavs Stun the Heat”