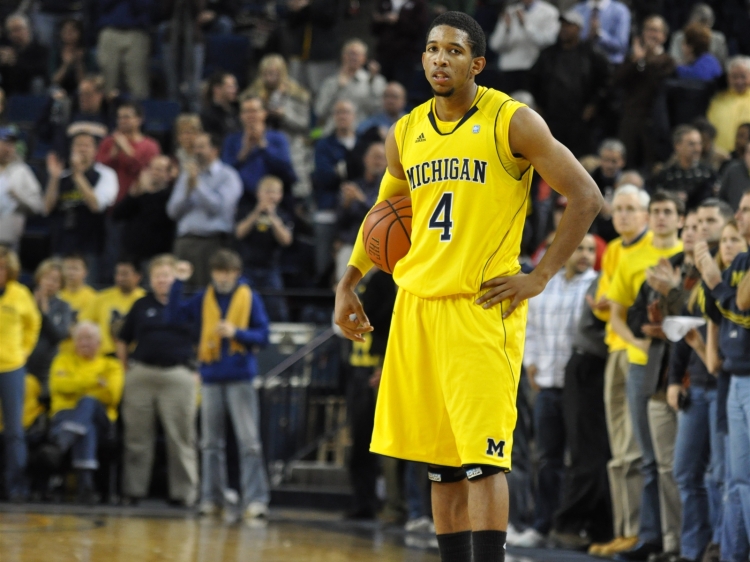 University of Michigan point guard Darius Morris confirmed yesterday that he will remain in the NBA draft. The sophomore point guard was Michigan’s best player last season and nearly led the Wolverines to a second round upset over Duke in the NCAA tournament. He has an NBA body, great talent and has grown by leaps and bounds over his two seasons in Ann Arbor, but he’s not ready for the NBA.

The vast majority of kids entering the NBA draft aren’t prepared to play in the league. Most haven’t mastered the basic skills necessary to excel at their position and many aren’t emotionally mature enough to handle the rigorous day-to-day life of a professional athlete. More than ever, the draft has become a talent grab, with emphasis placed on natural physical ability. Who has the quickest first step? What’s his wingspan? How’s his vertical leap?

The first 14 selections, known as Lottery picks are typically used on superb athletes with at least a decent skill level. In the mid to late first round teams snatch up unpolished or unathletic big men and highly skilled perimeter players who lack the explosiveness of lottery picks. Morris doesn’t fit into any of those categories.

There’s a lot to like about Michigan’s former point guard. At 6’4 he’s tall  for his position and quick and long enough to defend point guards and shooting guards at the next level. He’s quick off the dribble, a crafty finisher in the paint and has learned to create shots for himself and his teammates.

Michigan Coach John Beilein has been outspoken about Morris’ work ethic. The sophomore may have been the most improved player in the country this season, raising his scoring and assists per game from 4.4 and 2.6 to 15.0 and 6.7. His shot selection and accuracy also vastly improved.

Morris became a leader on and off the court. When Michigan was struggling midway through the Big Ten season and appeared to be on its way to another NIT bid, he spoke up at a team meeting and took responsibility for his poor play. From that point on he elevated his game and led the Wolverines to the NCAA tournament, where he played his finest basketball, knocking down a slew of clutch shots.

Yet, anybody who watched Morris on a regular basis knows that he still has major flaws in his game. His outside shot is inconsistent at best and lacks range. He connected on just 25% of his three-point attempts this past season. Teams can just sit back and let him shoot. Think Rajon Rondo, but unlike Rondo he’s not quick enough to make up for it. His decision making has improved, but he still forces too many shots and commits costly turnovers. He’s years away from being able to run an offense in the NBA.

Morris initially declared for the draft in April, but didn’t hire an agent, allowing him to maintain his amateur eligibility and return to school. He met with the NBA advisory committee, which provides underclassmen who are considering entering the draft with feedback from general managers in the league as to where they may be drafted. Morris was reportedly told that he’d likely be selected in the second round.

Unlike first round picks, second round picks aren’t guaranteed money and often don’t even make the team. Morris may believe that he’ll impress the scouts enough between now and the draft to work his way into the first round, but the flip side is that he may not get drafted. He only needs to look at his former Michigan teammate Manny Harris. Harris went undrafted last year after leaving school following his junior season. He was fortunate enough to sign on with the Cavaliers, but few undrafted players make a roster.

Harris is one of countless players who left school early only to be passed over on draft day. The local cautionary tale is Omar Cook, a highly touted point guard from Brooklyn who declared for the 2001 draft after a stellar freshman year at St. John’s. The shifty point guard was originally projected to be a lottery pick, but slipped to the second round because like Morris he couldn’t shoot. He was drafted by the Magic, who immediately shipped him to Denver, where he failed to make the team and was never heard from again.

If Morris stayed another year his stock was almost certain to continue climbing. Given his work ethic and the arc of his progression as a player he would have been in the running for Big Ten Player of the Year next season. If he continued to improve his jump shot and assist to turnover ratio he almost certainly would have been a first round pick next near, maybe even crept up towards the lottery. That would mean a lot more money than he’ll make as a second round pick and most importantly, it would have been guaranteed. The prospect of a lockout looming over the NBA would seem to be further incentive for him to return to Ann Arbor next year.

It’s never clear to outsiders who a kid listens to or what he bases his decision on when pondering whether to enter the draft. Morris said he discussed it with Coach Beilein and his family. Beilein knows better than anybody how much room Morris has to grow.  He hasn’t said whether he agrees with Morris’ decision as coaches sometimes do. You wonder who else was in his ear, friends, agents, maybe a girlfriend. Perhaps his ego led him to believe that he’ll be drafted in the first round, yet even if he is, he won’t go nearly as high as he would have next year.

Morris appears to be a good kid who’s worked hard for the opportunity to play in the NBA. I hope he makes it. After announcing his decision to remain in the draft,  he said, “Playing professional basketball has always been a dream for me.” Omar Cook had the same dream.

8 thoughts on “Darius is Dreaming”